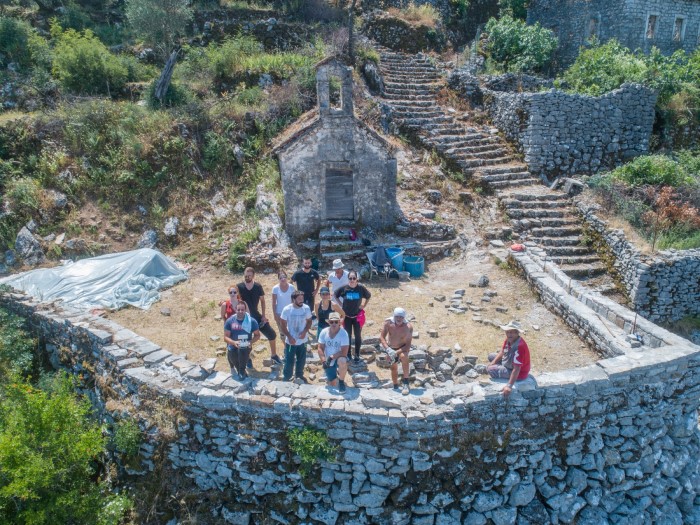 Small coastal village, located on Mount Vrmac and opposite Perast, is known for St. Elijah’s Church and a smaller Saint’Anna’s Church, which are important culturo-historical monuments of this place

Upper Stoliv boasts one of breathtaking viewpoints over Perast and the islands.

Numerous friends and fans founded Upper Stoliv Friendship Society. Its president, Marko Mihović, invited us to join him and his friends on clean-up and landscaping acitivities, which we gladly accepted, but also took the opportunity to discuss the possibilities of development of this place.

Marko is descended from one of the oldest families in Stoliv. He grew up developing love and awareness of the importance of this place.

“I bought 4 houses so I could start up an ethno village. However, conditions are not in favour of this project, which is why I live now in Lower Stoliv.”

The main goal of the Society is to enjoy a revival of the village. There are only two locals in the village now,  but Marko jokingly says that they are working on it to increase the number of natives, even by 50%.

The Society wants to invest in culturo-historical heritage (a plateau in front of St. Ann’s Church), and to add value to this place. Moreover, they are devoting considerable effort to draw attention of local institutions to further invest.

The most important thing to do is to build a road. Nowdays, one can reach Upper Stoliv only by foot, go horseback or be carried by donkeys. This makes it difficult for construction works.

According to their estimates, a road can be built in two days, which would encourage valorisation and repopulation of the village. Also, it would be necessary to improve the pedestrian path which runs through the village, considering the old steps are not steady.

Marco is full of ideas and love for this village. Five years ago he built bistijerna – traditional  rainwater harvesting system, and started repair works on old thrashing floor. However, all activities require large finance, but also to be physically present. “I am sailor, so most of the time, I’m not here”.

The village used to live on by growing its own food, since the land is fertile. People used to grow chestnut, and make it into flour. There were many olive trees, as evidenced by remains of two mills, which can be easily rented. However, olive oil production in their opinion isn’t profitable anymore. Marko remarks that the problem is the hillsides being inaccessible for the natives, so you must be in good physical condition to do that.

Tourists are coming every day. There is a great interest throughout the year. At the moment they can’t visit the church, because the mill fell down. The only structure available for a visit is the former village bakery. But you may enjoy staying in nature as well, considering this place’s natural characteristic (like mixing of sea and mountain air), which makes it a sort of medical resort.

“Foreigners often do training, go jogging … our people not as much or not at all”, he also adds that foreigners gladly respond to every clean-up action, and have more understanding for this kind of activity than locals.

Marko proudly points out that he loves his place and loves to contribute to its development. He has also planted one hundred olive trees according to the legend of the place, and hopes to have more time to harvest the produce. He claims to be motivated by love for the very place, and not by profit.

Gornji Stoliv used to have everything. It was also known for pyrethrum, which looks like chamomile or daisy, but has nothing in common with them.

Pyrethrum is a natural insecticide. It is annual plant whose root regenerates every year.

“It is effective against flies and mosquitoes. Powdered pyrethrum is used as tincture or packed in small bags. It is the only harmless insecticide. There is no drystone in which pyrethrum doesn’t sprout. ”

Dried and powdered pyrethrum used to be shipped abroad, mostly to Americas

The idea of ​​the Upper Stoliv Friendship Society is to do a comparative analysis of pure pyrethrum properties in relation to those of hybrids. Also, it would be very important to preserve indigenous seeds.

As for expectations, in addition to those mentioned in relation to the road construction, they would need assistance in marketing and promotion activities as well. As they state, they think of themselves currently as “navvies”, directing their efforts, energy and significant financial resources to the landscaping and keeping of the village. In that sense, they are looking forward to further joint actions with the Tourism Organisation of Kotor.

Soon there will also be a celebration of St.Elijah’s Day (Ilindan), the patron saint of Upper and Lower Stoliv. An entertainment programme that is already in preparation, and enjoying the natural beauties of this village will further enhance the impressions that one will remember for a long time!