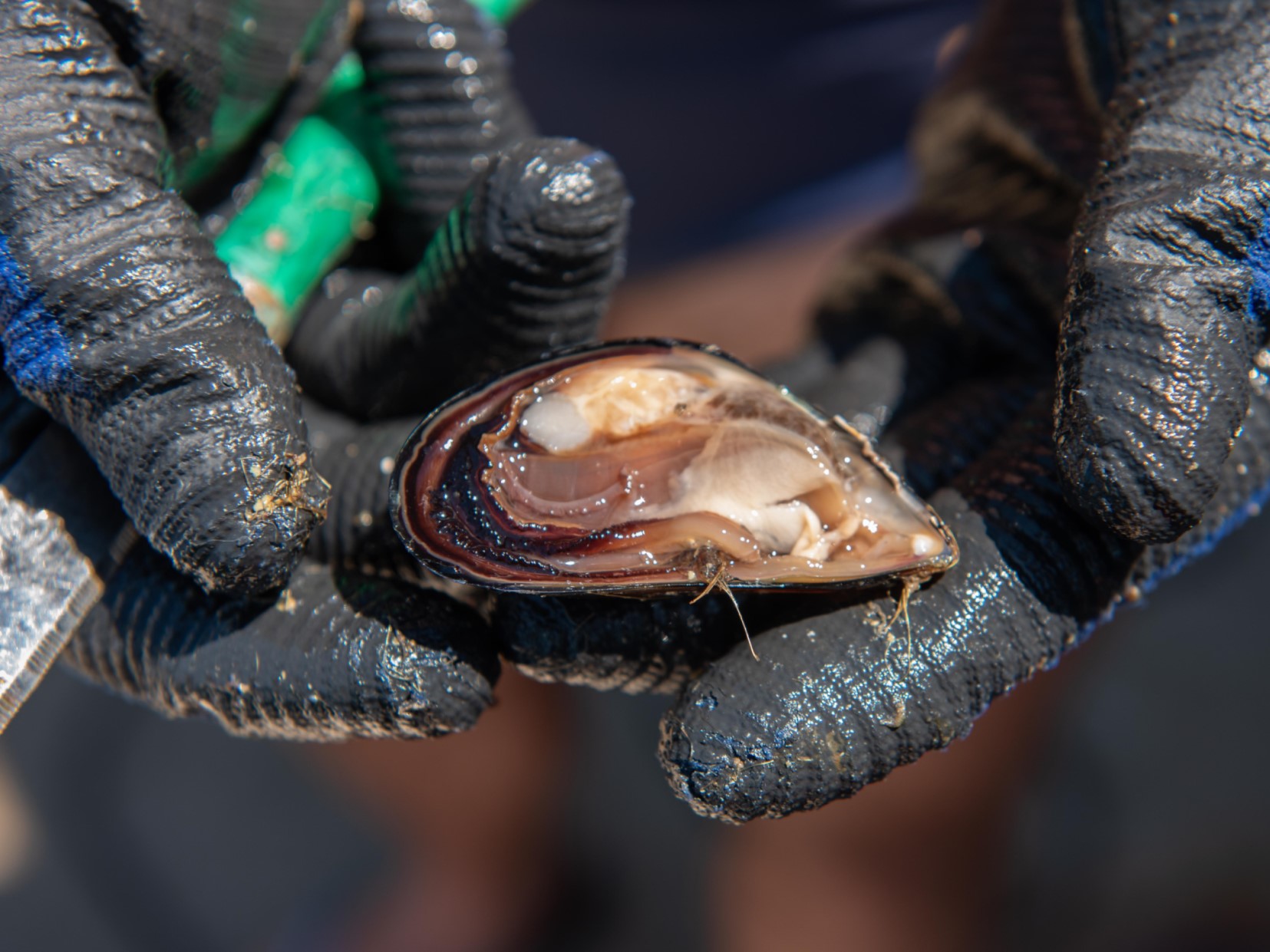 Mussels and oysters in Ljuta

From what Luka says, mussels and oysters are the main specialty prepared according to his own recipe.

Equally important, as Luka says, is the “open-air office, the most beautiful in the world”, on the very shore of the sea.

Luka is a former sailor. In his work with shellfish he is driven by the love for his family, but nonetheless a desire for closeness and togetherness. On the other hand, his partners speak of moments of silence at the bottom of the sea as the main reasons to dive. In their words “there is no noise, only peace and calm”.

Luka explains why shellfish farming is typical of Boka Kotorska. Accordingly, the water in the bay is of high quality, and there are no strong sea currents which discourage the phytoplankton population growth. These are algae that are crucial in development of shellfish meat. Additionaly, he states that “There is a large influx of fresh water, from rivers, springs, and streams, which carries a huge amount of minerals that are necessary for a shellfish to create its hard shell.”

A very important thing that Luka points out, and which tells of the importance of the shellfish biology, is that they filter the water, which is “the best way to heal the sea”. According to experts, mussels filter as much as 70 liters of water in one day.

Mussels are actually mollusks, recognizable by their shell caps. At the narrower end, by byssal threads they are tied to the bottom. They live in clusters at an average depth of 1 meter, and can weigh up to 20 dkg and reach 15 cm in length, although the average specimen is about 4-6cm long and heavy as much as 4 dkg.

According to Luka, mussel meat is tasty, very nutritious and low in calories, and “pure protein”. They are rich in omega-3 fatty acids, vitamins and minerals (B-complex vitamins, vitamin C, folate, iron, phosphorus, manganese, selenium and zinc) and are credited with numerous medicinal properties especially for heart muscle health.

Precisely because of nutrition facts, mussel meat is in great demand, and it can be eaten raw, cooked (popularly “on buzara”) or fried.

They are grown on nursery lines or buoys connected by ropes.

“At the same time, the rope serves as a collecting tool for the young ones, but also as a strap to install breeding pergolas. I own about 220 pergolas in one line and each of them can bring about 10kg of mussels. It takes one mussel a year and a half to reach its harvest size “, explains Luka.

In November, the carrying ropes or collecting tools are being cleaned of mussels. The young mussels are being picked and packed in cylindrical nets. The net is being tied with a thin rope and hung on the same ropes. From November to November, mussels grow on the collecting tool, and from November in pergola until the beginning of April, when the harvest begins.

Next is the story of oyster shells, better known as the best “aphrodisiac”.

“As for oysters, their growing process is a bit longer, it takes 3 years to reach the consumable size (6 cm). It is grown by placing collectors first. Personally, I use the traditional way, used pergolas made of mussels that I hang on breeding lines ”.

Luka explains that all shellfish grow very fast at the beginning, and can even double their size in one day. Their larvae float on the surface. After 7 days they transform into shells that remain in the shallow water not deeper than one meter, along the shores. Not so often mussels thrive in deeper water due to a large number of fish species that prey upon them.

Regulations often do not support their efforts, although there is a good cooperation with the Ministry of Agriculture and the local Secretariat for Entrepreneurship, Communal Affairs and Transport.

This business lacks a processing infrastructure. The coronavirus confirmed but also clearly pointed out the problems of shellfish farmers. If there were community devices for cleaning and storage of mussels, the state would not have to help in purchase of products. This way, the products could be distributed to local supermarkets, or even intended for export.

In Luka’s opinion, mariculture is in danger of disappearing. Although mariculturists are engaged in many useful activities, for example the fact that shellfish they produce enrich marine habitats, at the same time filtering the sea, they do not get adequate subsidies for what they do. As Luka says, “We give to the sea.”

He goes on to talk about development of the farm, and problems that occur in application for European funds precisely because of the restrictive regulations that stand out as the main obstacle to further development. Nevertheless, there is a strong will and a potential to brand domestic quality shellfish from Boka. Therefore, Luka hopes that a joint action of the competent authorities would significantly improve the situation.

The Association of Shellfish Growers, which he heads, will certainly give its contribution in order to maintain the widely recognized quality of shellfish.